How to Bless Your Heart

One of the happiest, most content women I've ever known had a hand-to-mouth existence. Her days were unpredictable and often filled with the appearance of dark and random events. Three of her sons were killed in their 30s and 40s. Grandchildren, great-grands, nephews, nieces and even cousins of ill-repute continually found their way to her door in their hours of distress. Their eyes were frequently hungry for whatever she could provide: a couch for a few days, weeks, or months; a pallet in the corner if the couch was taken; a few dollars till payday; or a bowl of whatever simmered on the stove in the tiny kitchen of her two-bedroom, Brooklyn apartment.

She was always laughing, always hugging. Even if she was chastising. Even as she was saying she was "flat broke"-- and she meant it. She was telling the truth when she said she had just five dollars to last till her social security check came in the mail. And it was usually because she had helped somebody else keep their lights on or bought somebody's baby some Pampers.

When I was a young woman, I spent lots of time in her apartment. I was fortunate enough not to need anything from her. And her ways certainly were not mine. Folks would have been blinking in the dark, and their babies would have been bare-bottomed if it was up to me. But from time to time, I think about her and realize how much she taught me.

Her way was to love, and she lived to be an old woman who was loved fiercely by an entire community beyond her own family. She lived by her own rules-- untainted by the opinion or judgment of others. She was exceptional at loving, making do, spreading cheer, and modeling that one can thrive-- no matter the circumstances. I imagine that her rooms were packed to the rafters with angels who kept her lights on, kept her rent paid and provided something to fix for dinner.

Her unspoken lesson to me was to have the courage to find my path and keep to it. The best path for each of us is the one that suits us. We ultimately don't need anyone to tell us who we are, what we should do, and how we should handle the situations that come into our lives. We have to figure it out for ourselves, learn not to need approval, and begin to value the power of living an authentic life. Once we can do that, we will have actually blessed our hearts. 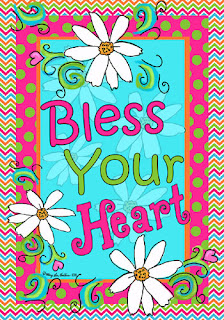 Posted by Angela Belcher Epps at 11:35 AM

What are your thoughts? I look forward to hearing from you.